I was so pleased with the results of my most recent sewing-related woodworking effort, that I decided to complete my collection of sewing related items while the woodworking tools were all out.  You know how it is... one thing leads to another.

Now, I do have a purchased sleeve board - a rickety folding little thing that collapses if you so much as look at it, never mind press a heavy iron to it.  A source of constant annoyance and frustration.

I do love the internet as a resource.  Just do an image search for "sleeve board for ironing", and up pop all sorts of versions.  I based mine loosely on the free board pattern available from Fearless Makers.

My version is made out of native Canadian hardwood:  sugar maple, 7/8" thick.  It's 25.5" long on the tapered side, and 22" on the other, and both are 5.5" wide  at the widest point.  I also made the taper somewhat narrower than the pattern, thinking that with very small wrists and thus small cuffs and sleeve openings, a very small taper might be particularly useful for me: 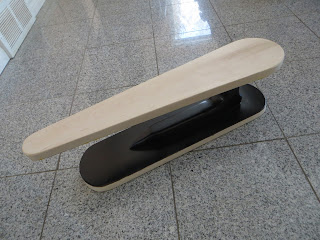 Both faces will be covered with batting and cotton to serve as ironing surfaces. 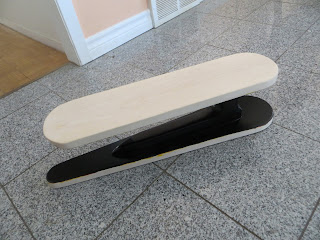 I'll be the first to admit that I have a teeny tiny tendency to over-engineer things. Of course I did that here too.  While the pattern calls for a single thickness of board for the support bridge, mine is made out of a doubled thickness:  I was afraid a single piece just wouldn't provide enough stability in use, especially as I wanted to avoid using screws to hold it all together.   The flat boards are simply bonded to the bridge with high strength wood glue, Titebond III; I felt that the double width of the support bridge was necessary to provide plenty of surface for the glue to grip.

I wanted to have the finished item look, well, finished, rather than made of raw wood - so I used a router to round off the edges of the bridge, and stained and varnished the non-functional, visible surfaces while leaving the surfaces which will be covered with batting and cotton, in the raw state.

The second, and final sewing item I made is a tailor's board. I based mine - again, with modifications - on a pattern published in this University of Kentucky pressing equipment document.   My main modification was to ensure both main pieces were the same length along their longest axis (they're not in the pattern).  I also put them together differently than what you'll see in internet photos:  whereas in all available versions out there the tapered points on the two main boards are oriented in the same direction, I made them point in opposite directions. 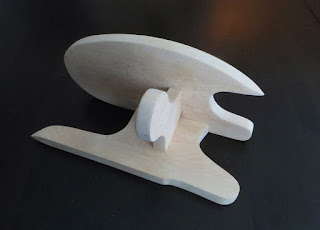 Why would I do that?!  Well, I'm right handed, so I hold the iron in the right hand and iron from right to left.  Thus, I want to have the boards oriented with the points to the left while I'm using them, and the area in front of them clear for my left hand to manipulate the garment piece.

So, flat surface in use: 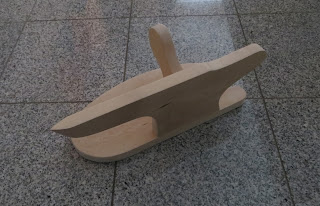 And, curved surface in use: 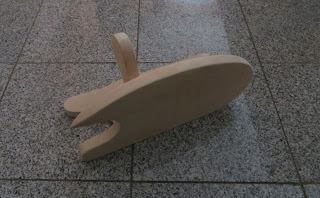 Also, I put the pieces together in such a way that there are three points of support when the board stands upright, making it very stable.  This way, I can use the curved end to press sleeve heads. 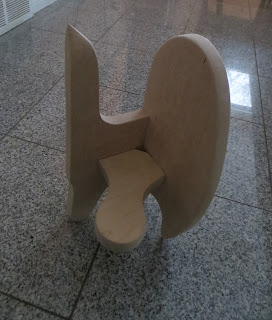 The pieces are fastened together with glue and dowels - no screws. 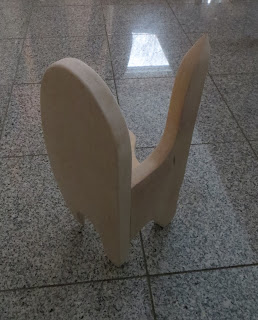 You probably can't see the wood details, which is a pity. I found a beautiful little piece of bird's eye maple for this project.  Very pretty.  It'll be just a delight to use and admire its grain while ironing!

As a bonus, I got myself a wee little mini-clapper out of the effort:  it's the removed (jig-sawed out) part of the support bridge of the sleeve board.  I just didn't have the heart to throw it in the fire... so I sanded it down and kept it instead. 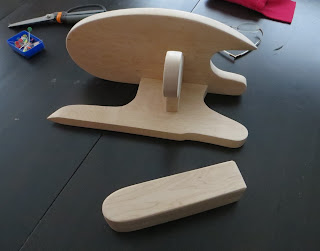 Now it's back to regular programming, aka sewing!
Posted by Digs at 06:27

Email ThisBlogThis!Share to TwitterShare to FacebookShare to Pinterest
Labels: sleeve board, tailor's board, woodworking 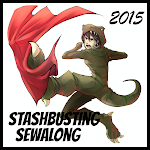